Driving in the semi-rural regions of Texas might seem like an incongruous setting for the rabid hip-hop stylings of Death Grips, but for the compulsive music listener, not all music has the good fortune to become connected to perfectly relevant experience. I recently took a solo drive up to visit a friend’s new lake house, which involved a bit of winding around in unexplored parts of the state. I knew that I could assault myself with whatever music I wanted for this drive. Death Grips immediately came to mind.

As I prepped for the trip, I got out The Money Store to put back in rotation, but I hesitated. A part of me still idealistically hopes that sooner or later, an official release of its follow-up No Love Deep Web will end up in my eager hands. Clearly, though, this white whale was not available at the time. I poked around online and could not even find any of its tracks in “soft” form from a reliable electronic source. 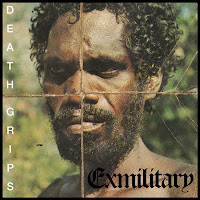 While I was initially OK with blasting The Money Store on my way to the lake, all this searching around gave me a hankering for some new Death Grips. I decided that their debut album Exmilitary, which is available in its entirety for free from the Death Grips soundcloud page, might do the trick. Against my usual listening practices, I downloaded the tracks, created a CD, printed off some passable cover art, and hit the road.

It did, indeed, do the trick. I listened to the album in its entirety about eight times in a row. Exmilitary packs the same abrasive, intellectual punch as its successor, but it is also a bit more eclectic and perhaps not quite as consistent. Some songs are structured with the traditional hip hop sample loop while others take a more cacophonous, unconventional approach.

With the benefit of hindsight, it seems that Death Grips was exploring a variety of approaches to investigate their potential as a band. Some of these experiments are more engaging than others, but in the long run this self-examination was smart. The best tracks on Exmilitary serve as the stylistic foundation for The Money Store, and in my opinion, the latter simply would not have been as successful without the research conducted in the former.

So it was that I found myself driving through the idyllic scenery of east Texas, blaring the primal rage of Exmilitary and pondering the possibility that it very well could make an appearance on this year’s top albums. There was, and is, caveat that has nothing to do with the quality of the album, though. Several of the tracks on the album segue, which, as an album listener, I really like. Because it was downloaded, compiled, and burned to CD, however, my listening experience suffered from the annoying gaps that most CD writing software puts between tracks. On this first copy, these were a full second, which resulted in a jarring listening experience. I have since made subsequent copies and have gotten it down to a blip, but a perceptible one, nonetheless. To really get the full feeling that I think Death Grips intended, I think that a first-generation copy is the way to go, but hardcopy of Exmilitary is not readily available  It seems that I have added yet another rare Death Grips album to my wish list.  Sigh.
Posted by Dr. Spin at 11:48 AM