For the majority of 2012, there has been an indie buzz surrounding Death Grips, but it wasn’t until the recent surreptitious release of their third album No Love Deep Web that I took notice. I say surreptitious because this album was not printed on a CD, nor was its tracklist available on ITunes. It was, in actuality, to be postponed by their record company and released next year. Death Grips, however, had been promising their growing fanbase that the album would be released in 2012, so in response, they simply posted the entire album to the web (with a rather shocking album cover, I might add) without the consent of their record company. There were subsequent heated exchanges between the two entities, most of which the band made public, and in the end, their unapologetic act of defiance against the conventions of commodity got them dropped. 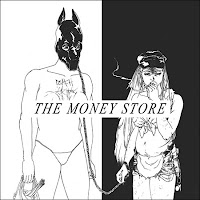 It seemed to me that record deals are hard to come by these days, and any group that was making that kind of sacrifice for their artistic integrity deserved at least more than a cursory glance. I wanted to take them seriously, though, and that would require hardcopy. Rather than download and burn No Love Deep Web (which I secretly hope will see CD release), I went on a search for their “other” 2012 album, The Money Store. As it turns out, it is incredibly compelling album that lays at the junctures of so many genres that it feels like something completely new.

A quick glance at Wikipedia describes Death Grips as an “experimental hip-hop group,” and in a broad sense, this is true. It goes on to say that the band consists of vocalist Stefan "MC Ride" Burnett with production team Zach Hill and Andy "Flatlander" Morin. This is also valid, but I think that the description pushes Hill's production skills to the forefront and suggests that his drumming skills are secondary. Nothing could be further from the truth. While Hill's production skills are formidable, his drumming is nothing short of phenomenal, which is plain to see when he performs live.

The potentials of electronic drumming often makes his work sound more like production craft, but a close examination of The Money Store's percussive aspects reveals a devastating virtuosity that blurs the line between technique and technology in the same way that Battles does.

Superficially, Death Grips is loud and angry – perhaps even caustic. They might not be for everyone. During our recent grout-sealing party at the new house, The Money Store was one of six CDs that was not packed in a box. I put it in just to see what would happen. Within five minutes, the volume was turned down to a barely audible level, and within ten, the angelic strains of Sigur Ros’ Valtari began wafting from the kitchen. Oh, well – experiment failed.

With a pedigree that runs in the same circles as noise bands like Hella and The Boredoms, It shouldn’t be too much of a surprise that Death Grips has such a caustic veneer. The Money Store is an incendiary, confrontational assault that pounds on the boundaries between hip-hop, electronica, industrial, and punk. Listening to it in traffic with too much caffeine is a recipe for a dangerous case of road rage. It is also, however, tempered by intellect and substance, and because of this, The Money Store has become a 2012 favorite. It’s first really angry music that I have listened to in a long time that I genuinely believe in.
Posted by Dr. Spin at 9:27 PM