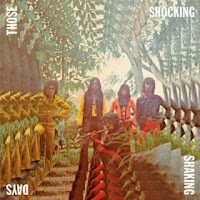 On the plane ride to aikido summer camp in New Jersey, I spent some time with a compilation called Those Shaking, Shocking Days. This is a collection of Indonesian progressive and psychedelic rock that I have struggled with since January. The existence of the scene that produced this music is a fascinating example of musical resistance in an oppressive regime. As it exists out of context, however, I’m of a mixed mind. Aside from a couple of songs in local languages and small flashes of local flavor, it shows very little of its “Indonesianness.” Instead, it collects adequate recreations of Arthur Brown, Pink Floyd, early King Crimson, the Moody Blues, and other artists from that era.  In terms of adventurousness, however, none of the artists really rise to the level of the great progressive and psychedelic bands that were their Western contemporaries.

I was contemplating how I should address this interesting, but slightly underwhelming, album when my attention was grabbed by an offer to re-Tweet posts related to CrossFit training. With a deftly well-timed reply, I got in. So, although I would suggest fans of 70s music check out Those Shocking, Shaking Days, I’d like to indulge in a (hopefully rare) non-sequitur transition from the blog’s usual topic, which is recorded music, to the role that CrossFit has played in training for the Sandan test.

First of all, my test is in aikido, a Japanese martial art that aspires to employ a non-destructive, but effective, approach to conflict. Our founder, Morihei Ueshiba, was a skilled practitioner of various martial arts, and synthesized the art after defeating an attacker without touching him. This rather famous footage shows O-Sensei at 85 performing his art at its most abstract and ethereal.

Our regular practice doesn’t really look like what O-Sensei was doing towards the end of his life. We are still at the level of physical contact, but we nevertheless hope to cultivate a cooperative, rather than destructive, interaction through a lifetime of dedicated work, learning not only how to throw, but also how to be thrown.  No matter how careful the practitioner is, however, this latter half of the practice can take its toll on the body over time.  Having practiced for over 15 years, and in various states of physical fitness, I am of the opinion that being in good condition is important for the serious aikido student if they plan to reap the benefits of practicing at an old age.

The kind of flexible, adaptive fitness that CrossFit offers is particularly appropriate for aikido practitioners. When I began CrossFitting, I quickly noticed a difference. With the metabolic conditioning component already in place when I walked into the dojo, I had the latitude to concentrate on nuance, timing, placement, and safety for both me and my partner. CrossFit’s movement-based strength training also allowed me to receive more powerful techniques, but without the stiffness that I used to feel when I was operating under the old-school bodybuilding paradigm.

CrossFit seems to be an excellent compliment to aikido practice, and one that I think will help to maintain the quality of my practice throughout the years. Please let me be clear, though - I see aikido and CrossFit as two entirely separate entities. Being a CrossFitter doesn’t automatically make you a better aikido practitioner, any more than learning how to forward roll will help you with deadlift form. As physically grounded activities, however, there is a crossover that occurs as the body’s awareness and potentials expand.

Just so that I am consistent with my mission statement, music does play an important role in motivating the body to move during CrossFit training. My current coach seems to favor dubstep, so, although I covered deadmau5 last year, very often working out at the box sounds like this.

Thanks to lots of practice and a little CrossFit on the side, I felt physically prepared for my Sandan test as I was flying on that plane with to 70s Indonesian prog pulsing in my ears. In fact, I was in what might have been the best shape of my life. The real test?  I intend to maintain this level of fitness as the school year starts and bring the training I have undergone into my everyday life in a positive, constructive way.
Posted by Dr. Spin at 2:22 PM