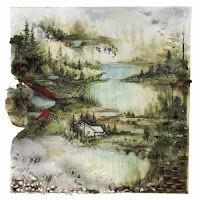 In certain circles, Bon Iver’s self titled release was getting some attention last year, but I was cautious.  Hype is often controlled by gatekeepers with unknowable motivations, so it makes me apprehensive.  I certainly didn’t want to force-feed myself an album’s worth of warbling coffee shop folk if I did not have to. Still, Bon Iver came up with high recommendations on many year-end lists, so eventually I caved in and gave it a listen on Spotify.  My preconceptions were immediately shattered. Impressed, I saw a live video for the song Perth, and realized I had been missing out on something quite special.

Judging by the bass sax alone, it's pretty clear that Bon Iver is intended as a departure. The band's nearly orchestral scope stands in direct contrast with the majority of current music, harkening back to the stadium acts of the late 80s. Dire Straits, the Who, Peter Gabriel, Pink Floyd, and even the Police toured with multiple guitarists, drummers and horn sections in an attempt to fill arenas with pristine recreations of their albums. Of course, this format fell out of favor in the 90s when the alternative became the mainstream. Now “indie” is the new alternative, and Bon Iver’s innovates by embracing the large rock ensemble as an independent collaborative environment.

This collaborative approach is the key to the artistic success of Bon Iver. Lead singer, songwriter, and conceptualist Justin Vernon keeps Bon Iver from falling into Coldplay’s “New Adult Contemporary” trap with a complex yet fluid intermingling of lyrics, timbres, harmonies, and atmospheres that inextricably binds each song to its ambience and instrumentation.  This environment was the result of the musicians to sharing in the development of Vernon's ideas.  In the end, covering the songs in a stripped-down format, although possible, would do them an injustice, and to extricate any given song from its place in the arc of the overall listening experience would do it a disservice. Bon Iver is an album in the truest sense, and if you don’t listen to it as a whole work, you are missing out on something, too.

Oddly, finding a CD copy of Bon Iver was far more troublesome than it would seem, and was the inspiration for my previous post concerning the fate of the album as a format.  Despite garnering so much critical attention in 2011, I stopped at no less than five stores, one of them an actual record store, before finding a copy of Bon Iver at Target on a baby supply run. One Best Buy had a card for Bon Iver, and a copy of their first album, but no copies of the current release. Judging from the dwindling size of the music section at Best Buy, I assume that they simply will not restock it.

Despite my first, ill-informed impression, Bon Iver is an incredible work, so it is nice to hear that every now and then, the Grammys get something right.  They certainly deserve their recognition - the album has set the standards incredibly high for 2012.  It is even more gratifying to hear that Bon Iver refused to perform on the ceremony. Judging from the format of current big media performances, I can imagine that Justin Vernon was asked to perform as Bon Iver as a talking head in a medley or in an overglamourized, mismatched duet.  Performing in such a format represented a compromise that he, and the band, was unwilling to make. Good for them.
Posted by Dr. Spin at 9:34 PM